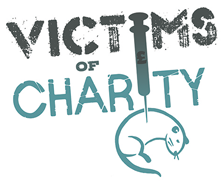 Victims of Charity is an Animal Aid initiative that reveals cruel and medically unsound animal experiments funded by research charities. It provides the tools for you to take simple and effective action.
Together we can put an end to the suffering.